Blog: WHY I BECAME A WRITER With Kathryn Meyer Griffith

Posted by Jeanne Guzman at 6:34 AM 3 comments: Links to this post

Blog and Giveaway--The Affordable Art of Self Promotion: Mystery or Myth? With Guest Blogger Kerri Nelson


I’ve been in or associated with the publishing industry for about a decade now.  I originally started out as a Promotions Chat Coordinator for a very popular author promotions company.  I coordinated and moderated chats on a nightly basis.  It was so much fun to meet the authors, get industry insider information and watch those authors hawk their new releases to the masses.  But I was never really sure if folks were going out buying those books or just hoping to win a giveaway by appearing at the chat.
These days, it seems that blogging has replaced most chat situations.  It is much more convenient than having to be available at a specific time and being stuck at your computer for an hour or more.  Plus, with chats sometimes the screen is moving so fast that you feel overwhelmed to respond to everyone who bothers to show up.  I like blogging and a massive blog tour is something I’ve chosen as a main promotion tool for my latest release, Courting Demons.
Is it affordable?  Yes.  It can be absolutely FREE if you do it all yourself.  I’m attempting to do it that way this time around but I know plenty of folks who hire companies to set up the tours for them.  There are certainly pros and cons to both routes but the bottom line is that you should always seek out ways to save money while still getting the word out there.
Obviously, you can always find ways to spend money while promoting your book.  You’ll see the little cute items I’m giving away for today’s appearance are just two examples of the party favor swag that are popular giveaways.  I’ve also done business cards, bookmarks, and custom designed goodies (look for my own Momwitch Bread Bag clips as giveaways throughout my tour), and once upon a time I designed custom book trailers for myself and other authors.  Then there are professional promotions companies, paid advertising, websites and social media.  Some are free and some are quite costly.
In all my years of writing (and in the past 2+ years since being published), I’ve tried just about all of the above.
And so you ask…
What are you doing to promote yourself?
KN:  I’m searching for the most affordable methods of meeting new readers and capturing their attention without spending a ton of money.  I enjoy the blog tour route (try to find blogs that appear to readers as much as or more so than other authors).  I’m doing some minor giveaways (like those cute promo swag items) but I’m also doing a major giveaway (one Amazon Kindle at the end of my tour).  But other than that, I’m seeking out opportunities where I can find people that might be interested in my book.  I’m on the search for the great niche market!
How important do you believe it is to have your own blog/ website/ FaceBook page/ twitter?
KN:  I believe you absolutely MUST have a decent website.  A blog is very nice if you are committed to posting regularly and I dabble some in Twitter.  If you can manage to keep your number of followers considerably higher than the number of folks you follow—you might get in and out of there without it being a time drain.  As far as that “other” site you mention—I don’t go there.   I believe that if you have the chance to play games and goof off, you’ll find your productivity decrease as a result.  Sometimes it is just not worth it.
In your opinion, what would be Taboo?
KN:  Too much social networking can work against your productivity (as mentioned above).  I think trying to promote on sites where your subject matter could be found controversial would be another.  Otherwise, I think trying to sabotage someone else’s book signing/appearance or using professional meetings or loops as a place to chat up your own stuff is no good.  There have to be some rules of decorum.  This is a business just like anything else.
In your opinion, what is a complete waste of time?
KN:  A complete waste of time to me are things like high cost print ads.  I like e-cover ads and sell them very cheaply ($5 or less a month) on my promotions blog (www.thebookboost.blogspot.com).  But most of the other sites are charging double and triple digit amounts for a simple banner ad.  It blows my mind at the cost of advertising like this—plus print advertising boggles the brain waves as well.  Have you checked out some of those figures?  Anything that takes a lot of money from you off the top with no personal interaction between the reader and the author, is a waste of time and money, in my opinion.
Any words of encouragement for those just starting out?
KN:  Even before you sell your first book (or particularly if you’ve sold it but it hasn’t released yet), get that website going.  Sometimes the agents and editors like to see your web presence BEFORE they sign you.  Websites are the most affordable and highly effective way of reaching people in the market today.
I also believe that if you can find a good group blog with other established authors (preferably in your genre) that this could be a wealth of great cross promotion for a newbie author.  Ask around your chapters and see if anyone is looking for an eager new blogger.
Whatever you choose to do for promotion…it doesn’t have to be a mystery.  There are definitely folks out there willing to help provide you with every choice known to man and machine.  And, to answer the question…is affordable promotion a myth?  No way.  It is out there and I won’t stop until I’ve found it all.
©  Kerri Nelson 2011 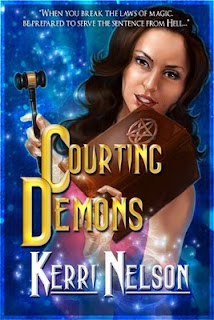 Courting Demons
Paisley Barton was already having a bad day before she turned her husband into a rat.
First, she was fired by her boss and then came home to find hubby in the shower with a naked blonde chick. They say that hell hath no fury like a woman scorned but this break-up may just unleash hell on Earth when Paisley casts a spell of vengeance against her philandering husband.
After her spell casting inadvertently opens a portal between dimensions, Paisley finds her family home transformed into a nightly courtroom for settling disputes between demons of the underworld and she’s the judge! If that’s not enough, she’s got to deal with a charming, ancient demon named Camden who wants to be her personal bodyguard while trying to explain her husband’s sudden, mysterious disappearance to sexy police Detective Dalton Briggs.
But Paisley will show them all that an everyday working mom is better equipped than most to deal with the mystical mayhem…and with a tempting demon hottie and a flirtatious young detective vying for her affection, she soon learns that being single again isn’t so bad after all.
“When a wronged wife turns her cheating husband into a rat, you know you have to keep reading! Kerri Nelson offers up a lot of fun and wild magic in Courting Demons!” --Bestselling author Linda Wisdom, Demons are a Girl’s Best Friend

Author Bio:
Kerri Nelson discovered her love of writing at an early age and soon became a columnist for her local newspaper winning the Outstanding Young Journalist of the Year Award for her efforts.
After a fifteen year career in the legal field, Kerri fulfilled her lifelong dream of publication and is now an award winning multi-published author of nearly every genre under the sun (and moon) and also writes young adult fiction under the penname K.G. Summers.
A true southern belle, she comes complete with a dashing southern gentleman and three adorable children for whom she often bakes many homemade treats.
Kerri is an active member of Sisters in Crime and Romance Writers of America as well as numerous chapters including Futuristic Fantasy & Paranormal Writers and her Presidency of Celtic Hearts Romance Writers.
Read more about Kerri’s books at her website:  www.kerrinelson.com
Follow her on Twitter here:  www.twitter.com/kerribookwriter
Visit her industry blog here:  www.thebookboost.blogspot.com
Buy Links (print and e-book versions available 9/15 wherever books are sold but here’s the publisher link—free gift available with purchase of print copy—while supplies last):
http://jupitergardens.com/Courting-Demons-by-Kerri-Nelson-print.html
or
http://pinkpetalbooks.com/Courting_Demons_by_Kerri_Nelson_print.html
Excerpt for Courting Demons: http://www.jupitergardens.com/excerpts/kn_cd.html
Giveaway for the day:
Leave a question or comment to be entered to win today’s prize: A Devil Duck + a Witch Broom Pen Combo Pack!
Then, enter to win my book tour Grand Prize Kindle by following me on tour and e-mailing me the answers to each question of the day at the end of tour.  The more questions you answer, the more entries you gain.
Question of the Day:
Who sentences Paisley to a year of grievance judge duty?
Details on how to enter to win the GRAND PRIZE Kindle at the end of my “Dark Days of Demons Tour” located here:
http://kerribookwriter.blogspot.com/2011/09/courting-demons-blog-tour-win-kindle.html
Posted by Jeanne Guzman at 5:53 AM 18 comments: Links to this post

Blog: The Story of Witches with guest Kathryn Meyer Griffith

The Art of Self Promotion With Guest Blogger Jordan K Rose

It’s getting near that time when my book will be hitting the virtual E-Book shelves, and that being said, I started wondering what else I could do to promote myself to the world. I have a web site, book trailer on utube, I’ve started a facebook page just for my writing, I’ve been tweeting, I’ve had cards made up to hand out to anyone who looks my way, I’ve had buttons made, again to hand out to anyone who looks my way, and I have little keychains on order. I have a list of blog sites to guest at when it’s release time, and I’m already looking for conferences to head to where I can sit down and meet the public. But I have to wonder, is that enough? 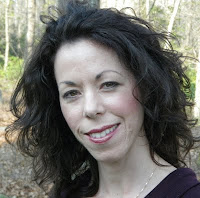 The pleasure is all mine!
For more about Jordan and what she's writing, visit her sites at--
Find Jordan on her website at www.jordankrose.com.
Follow her tweets on https://twitter.com/#!/jordankrose
Friend her on Facebook at https://www.facebook.com/jordankrose
Posted by Jeanne Guzman at 6:13 AM 10 comments: Links to this post

The Story of Vampire Blood by Kathryn Meyer Griffith